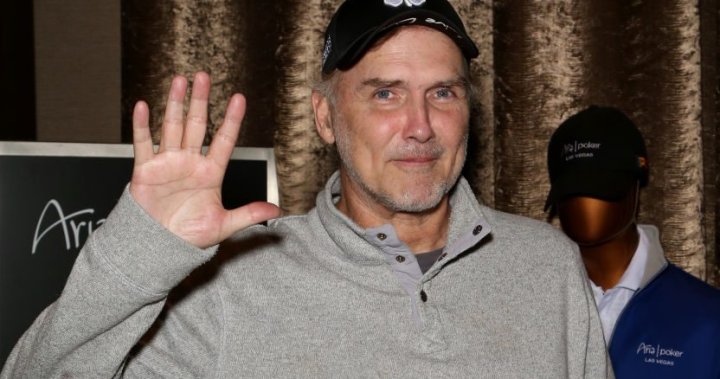 Norm Macdonald, the sardonic comedian from Quebec who rose to stardom on Saturday Night Live, has died after a prolonged battle with cancer. He was 61.

Macdonald’s management team confirmed his death in a statement to Deadline and Variety on Tuesday. They said he’d been quietly dealing with a cancer diagnosis for nine years.

“He was most proud of his comedy. He never wanted the diagnosis to affect the way the audience or any of his loved ones saw him. Norm was a pure comic,” Lori Jo Hoekstra, Macdonald’s longtime producing partner, said in a statement.

“He once wrote that ‘a joke should catch someone by surprise, it should never pander.’ He certainly never pandered. Norm will be missed terribly.”

Read more:
Joe Rogan doubles down on unproven ivermectin after bout with COVID-19

Born in Quebec City on October 17, 1959, Macdonald cut his teeth as a stand-up comic at comedy clubs in Canada before appearing as a contestant on the show Star Search in 1990, which helped him get a foothold in Hollywood. He spent a season writing for Roseanne before landing a role on SNL as a cast member in 1993.

Macdonald became a fixture as host of SNL‘s “Weekend Update” segment for three seasons, and ultimately stayed with the cast until 1998. He was known for doing impressions of various celebrities including Burt Reynolds, whom he played opposite Will Ferrell’s Alex Trebek in “Celebrity Jeopardy!”

MacDonald left the show amid controversy for his take-no-prisoners approach to O.J. Simpson on Weekend Update.

He went on to launch The Norm Show, a hockey-inspired comedy which ran from 1999-2001, and later made a number of appearances on late-night TV shows. He also did voice work on several TV shows, including the recurring role of Death on Family Guy.

Macdonald provoked backlash while promoting his self-titled Netflix show in late 2018, when he said he was happy that the #MeToo revelations had “slowed down a little bit.” He followed that with an apology that mocked people with Down syndrome, prompting him to make yet another apology on The View.

“It’s always bad when you have to apologize for the apology,” Macdonald said.

Fans and celebrities mourned Macdonald’s passing on social media, where they hailed his style and shared his more memorable late-night talk show appearances.

The world was a much funnier place because Norm Macdonald was in it. We’ve lost a comedic genius, and a great Canadian. Sending my condolences to his loved ones and countless fans mourning his passing.

“My dear friend Norm MacDonald passed after a brave 10 year battle,” fellow Canadian Jim Carrey tweeted. “He was one of our most precious gems. An honest and courageous comedy genius. I love him.”

“I was a huge fan of Norm Macdonald and I essentially ripped off his delivery when I first started acting,” Canada’s Seth Rogen wrote on Twitter. “I would stay up specifically to watch him on talk shows. He was the funniest guest of all time. We lost a comedy giant today. One of the the all time greats. RIP.”

Tom Green also joined the Canadian comedians mourning one of their own.

“Words can’t describe how saddened I am to hear of the passing of my friend,” he wrote.

RIP Norm Macdonald. A sincere hero of mine and boundless source of inspiration since I was a teenager. He was also that rarest of beings: a truly original artist. The world’s loss is Canadian heaven’s gain. We will never see his like again.

Man what a legend Norm Macdonald was.

His legendary appearance on Conan where he roasts Courtney Thorne Smith for doing a movie with Carrot Top was legendary. pic.twitter.com/Gi2NP2gQky

#RIPNormMacdonald His ace impressions of Andy Rooney, Larry King, Burt Reynolds and David Letterman (“ehhh… you got any gum?”) on SNL never fail to make me laugh. pic.twitter.com/gzZ21Fj9m1

To so many people in comedy, me included, there was nobody funnier than Norm MacDonald. You always hoped he would hang around after the work was done, just so you could hear his stories and get a laugh. So hilarious and so generous with his personality. I’m gonna miss him.

Many also shared YouTube clips from Macdonald’s last stand-up performance on the Late Show with David Letterman. Macdonald used part of the performance to thank Letterman for inspiring his own comedy career.

“If something is true it is not sentimental,” Macdonald says, while fighting back tears. “And I say in truth that I love you.”

Macdonald’s SNL stint proved to be the height of his fame, but on-screen attention wasn’t his career goal.

“In my mind, I’m just a stand-up,” Macdonald told the New York Times Magazine in 2018. “But other people don’t think that. They go, oh, the guy from SNL is doing stand-up now.”

Shares
2021-09-15
Previous Post: Apple’s new iPhone 13 is better, but not by much.
Next Post: How to eat addictive foods in moderation without quitting them altogether